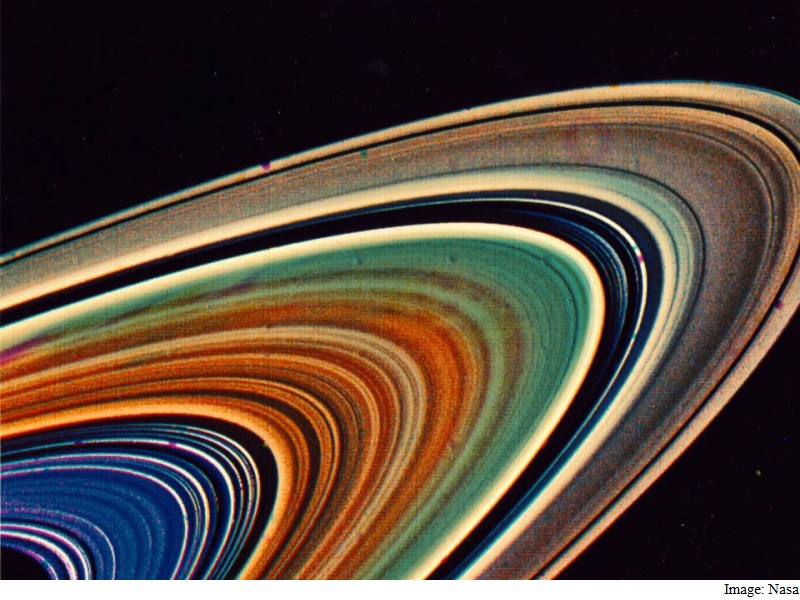 An enigmatic ring of icy particles circling Saturn, herded into a narrow ribbon by two tiny moons, was probably born of a cosmic collision, according to a study published Monday.

The so-called F ring, some 140,000 kilometres (87,000 miles) beyond the sixth planet from the Sun, orbits at the border between Saturn’s other rings and several moons.

Further toward Saturn, millions of ice blocks populating the planet’s haunting halos are prevented from cohering into moons by its powerful tidal forces.

Further out are Saturn’s main moons, distant enough to have cohered into spheres with their own gravity: Mimas, Enceladus and Titan, which is the only moon in our Solar System with a substantial atmosphere.

And in the boundary zone F ring’s icy particles whirl around the planet in a band barely 100 kilometres (60 miles) across, itself orbited by moons Prometheus and Pandora.

Scientists have long known that these so-called shepherd moons were partly responsible for keeping the F ring in tight formation.

What they did not know was how this unusual configuration came into being.

Ryuki Hyodo and Keiji Ohtsuki, astronomers from Kobe University in Japan, used computer simulations to show that Prometheus and Pandora are likely the by-product of a collision at the outer edge of Saturn’s ring system.

Previous speculation along these lines concluded that two icy mini-moons crashing head-on would have simply disintegrated, adding yet another ring to Saturn’s collection.

But what if the objects were made of something less fragile, and hit each other at an angle?

In that case, “such an impact results in only partial disruption” of the mini-moons as opposed to their total destruction, the authors conclude.

The collision would also produce “the formation of a narrow ring of particles” which becomes a new ring.

Hyodo and Ohtsuki further speculate that this sort of process might not be a once-off oddity but rather the “natural outcome” of ring formation under certain conditions for giant gas planets.

This “may explain not only Saturn’s F ring, but also features of the Uranian system,” Aurelien Crida, a scientist at France’s National Centre for Scientific Research wrote in a comment, also in Nature Geoscience.

Saturn is the second largest planet in our Solar System after Jupiter, and has a radius about nine times greater than Earth.

Its spectacular ring system has nine complete rings and several discontinuous arcs, all of them mainly made of ice particles, with lesser amounts of rocky debris and dust.

Some 60 moons circle Saturn, not including hundreds of “moonlets” such as the F ring’s Prometheus and Pandora.

Much of the data and high-resolution images we have from Saturn and its rings was collected by the Cassini space probe, which arrived near the giant planet in 2004.

HIGHLIGHTS The Nokia Android phone launch event scheduled to start at 12pm Nokia 3, Nokia 5, Nokia 6 price in India and release date to be announced Prices of all three phones have already leaked online Nokia 6, Nokia 5, and Nokia 3 India launch event is over, and all the details of the three […]

HIGHLIGHTS Servers of M.E.Doc seized as part of an investigation into the attack Initial infections were spread via a malicious update issued by M.E.Doc At least 3 M.E.Doc updates had been issued with backdoor vulnerability Ukrainian police on Tuesday seized the servers of an accounting software firm suspected of spreading a malware virus which […]

Someone’s got an itchy trigger finger at HTC, because a companion Edge Sense app for the HTC U 11 briefly appeared on the Google Play app store, before getting pulled again. It’s designed to walk users through what could be this phone’s most distinctive feature. Based on a variety of leaks we’ve seen up […]