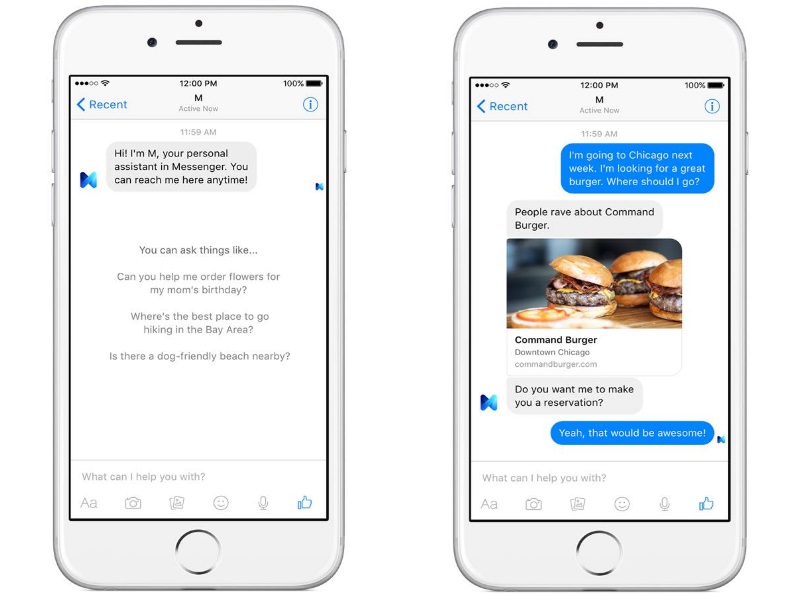 The personal digital assistant – dubbed “M” – completes tasks along with seeking out information at the behest of users.

“Unlike other AI-based services in the market, M can actually complete tasks on your behalf,” Facebook’s David Marcus said in an online post.

“It can purchase items, get gifts delivered to your loved ones, book restaurants, travel arrangements, appointments and way more.”

Marcus described the test as an early step in a journey toward building a large-scale service using the virtual assistant software.

Cortana is Microsoft’s answer to Apple’s Siri and Google Now, which respond to voice commands on mobile devices.

The launch is part of an effort by Microsoft to expand its mobile presence despite a weak showing for its Windows Phone devices.

“The Cortana app can do most of the things Cortana does on your PC or on a Windows phone,” Microsoft’s Susan Hendrich said in a blog post.

“With the app, you can manage your hectic lifestyle by setting and getting reminders, searching the web on-the-go, tracking important information such as flight details, as well as starting and completing tasks across all of your devices.”

A beta version of Cortana was made available on Monday to US users of Android devices, and “we are planning to roll it out to other markets,” Hendrich said.

Taxi services firm Cabcharge Australia Ltd has hired software developers to rush a payment app to the market as its fights against the soaring popularity of ride-sharing service Uber Technologies Inc. Cabcharge, which provides the electronic payments system for 97 percent of Australia’s taxis, is one of scores of traditional taxi businesses around the world […]

Uber Said to Project 3-Fold Jump in Bookings in 2015

Uber Technologies Inc’s global bookings are projected to rise nearly threefold to $10.84 billion (roughly Rs. 71,262 crores) this year and reach $26.12 billion (roughly Rs. 1,71,713 crores) the next, according to a recent presentation for potential investors seen by Reuters. The ride-hailing service, which operates in over 50 countries, keeps 20 percent of booking […]

The average mobile app usage in India has grown by at least 131 percent and has outpaced the global growth rate, panellists participating in the Apps India conference 2015 have said. According to the panellists from firms like PricewaterhouseCoopers (PwC), Vserv, Mindbowser and (x)cube Labs, the shift from e-commerce to m-commerce and more engagement with […]