Thousands of people took to the streets of the German city of Dresden on Saturday to send a message of welcome to refugees after a string of violent anti-migrant protests in the region.

Led by protesters holding a huge banner that read “Prevent the pogroms of tomorrow today”, the crowds marched peacefully through the eastern city under the watch of police in riot gear.

“Say it loud, say it clear, refugees are welcome here,” they chanted.

Police said 1,000 people took part in the protest, which was called by the Anti-Nazi Alliance, while organisers put the numbers at 5,000.

Dresden is the stronghold of the anti-Islam Pegida movement, whose demonstrations drew up to 25,000 people at the start of the year.

The eastern state of Saxony, of which Dresden is the capital, has suffered a series of ugly anti-migrant protests, with the government saying on Friday it was sending police reinforcements to the state.

“We’re here because what is happening in Germany, particularly in Saxony, is unbearable,” said Eva Mendl, a teacher who was among the demonstrators.

“Hating refugees, who live here because they can no longer live at home, because they have been through a war … that shouldn’t happen in a rich country,” she added.

Afterwards, several hundred participants in the rally gathered in the nearby town of Heidenau, which has been the theatre of protests over the opening of a new refugee centre.

Local authorities had initially banned all outdoor public gatherings in the town of 16,000 this weekend, fearing a repeat of last weekend’s clashes between police and far-right protesters in which several dozen people were injured. 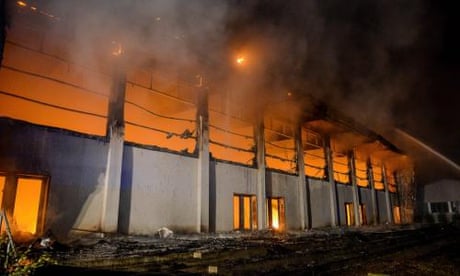 But the federal constitutional court on Saturday struck down the ban, paving the way for the pro-refugee rally, which passed off peacefully, with refugees and their supporters dancing together in the street.

Germany is struggling to absorb a vast wave of asylum seekers that is expected to reach a record 800,000 this year.

Chancellor Angela Merkel was booed by far-right activists during a visit to Heidenau’s new refugee centre this week, with about 200 people shouting “traitor, traitor” at her.

Merkel has vowed a zero-tolerance approach to anti-migrant violence.

Public opinion is largely behind her, with 60% of Germans polled by public broadcaster ZDF saying that Europe’s biggest economy is capable of hosting the asylum seekers.

At the open: TSX slips; BlackBerry surges after arbitration win

Canada’s main stock index opened slightly lower on Wednesday, while BlackBerry Ltd shares received a sharp boost after an arbitration panel ruled that chipmaker Qualcomm Inc must refund it $814.9-million in royalty payments. The Toronto Stock Exchange’s S&P/TSX composite index was down 27.92 points, or 0.18 percent, at 15,69919 shortly after the open, as […]

Remarkable Weight-Loss Effects of the Clen

Clenbuterol is used as a medicine for breathing disorder as well as a decongestant. Clenbuterol due to its properties which aid weight loss is used as a thermogenic and is widely popular amongst the fitness professionals, models, celebrities or anyone who wants a petite muscular. It is very commonly used by anabolic steroid users as […]