‘Given how much the media has hampered his administration, Trump’s goal seems to be to snuff it out any way possible.’ Photograph: Shawn Thew/EPA

By now, everyone has heard the blockbuster news that Trump allegedly asked the FBI director, James Comey, to drop the Michael Flynn investigation. But buried deep inside in the the New York Times story was another bombshell that was just as important: Trump reportedly urged Comey to jail journalists who publish classified information.

Tied to this disturbing news was another story that didn’t get enough attention last week amongst the chaos: the Washington Post reported multiple times that part of the reason Trump fired Comey was that he was incensed that the FBI was not being more aggressive in investigating leaks coming out of his administration. Apparently, Trump was even insisting at one point that the FBI needed to go after leaks about non-classified information (which is not a crime by anyone’s standards).

Since before he took office, Trump has been obsessed with leaks, and you can see why: almost on a daily basis, his administration is painted as chaotic, corrupt and unhinged in the papers – even by the people who work in the White House. He has had to fire Flynn due to leaks showing he lied, multiple policies have been stopped in their tracks because of leaks and even the threat of war with Iran was tamped down because of official secrets that were reported by journalists. 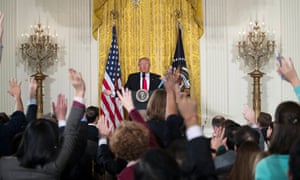 It’s bad enough for press freedom that Trump is so determined to go after whistleblowers and sources within his administration who are attempting to get the truth to the American public. When their sources are investigated, journalists face the prospect of surveillance or subpoenas to testify and it can inhibit important investigative reporting. But directly prosecuting journalists is an unprecedented step that should send a chill down the spine of any American who values the first amendment – no matter their political persuasion.

Given how much the media has hampered his administration, Trump’s goal seems to be to snuff it out any way possible. In retrospect, it’s almost amusing that so much ink was spilled on Trump’s now notorious contention he was going to “open up” libel laws to sue newspapers that wrote stories about him he didn’t like. This was always a red herring. After all, there are no federal libel laws to “open up”.

The real danger, which got far less attention, was that Trump might use the draconian 100-year-old Espionage Act to target reporters with prosecution for publishing classified information. Less than six months into his presidency, we now have reason to believe this is a distinct possibility.

The Espionage Act is blatantly unconstitutional, which is part of the reason why every justice department in modern history has avoided reaching the point of prosecution against a newspaper. But it has long been a specter hanging over journalists: if you read just the text of the law, it is being violated almost daily by reporters at every major paper in the country. (And it’s not just journalists: the law is so wildly broad that just by reading the New York Times, you are arguably guilty.)

Many lawyers have believed the law would be struck down if a prosecution ever took place, but it’s not exactly a chance anyone wants to take. Just by bringing a prosecution without conviction, Trump can surely halt an untold number of stories that come right up to the line.

The good news is, at least so far, the Trump administration’s obsession with leaks has only emboldened more people to come forward, and journalists to push even harder behind the scenes. There are almost too many examples to count of the administration admonishing employees not to leak behind closed doors, only to see their warnings promptly leaked to the press.

Ironically, Trump firing Comey – in part for not being aggressive enough in leak investigations – has opened the floodgates to more leaks on what his administration was doing to potentially obstruct justice.

The Times reported that there were multiple Comey memos detailing every interaction that he had with Trump before he was fired, including some that were classified. One has to wonder how many of those who – during the long-gone Obama years – called for Edward Snowden to be prosecuted are now secretly hoping that there is another Snowden somewhere in the FBI or justice department.

Millennial lender Upstart just raised $32.5 million to license its tech to other companies

Upstart, a nearly five-year-old online lending company that prides itself on quickly identifying people who are less likely to default on money leant them, has raised $32.5 million in fresh funding that brings its total funding to date to around $85 million. Partly, the company plans to use the capital to further fuel its current growth trajectory. In fact, according […]

Things Every Boat Owner Should Do

You need to take care of your boat the same way that you would your car. This means that there are various jobs that you need to do on a regular basis. You would be wise to make a list of these jobs so you do not forget to do them. You might also want […]