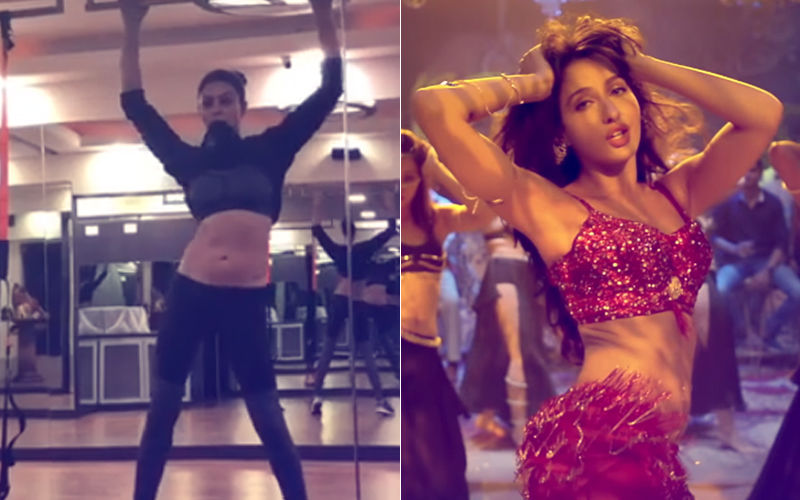 When Nora Fatehi danced to Sushmita Sen’s iconic song Dilbar Dilbar from Sirf Tum (1999) in Satyameva Jayate (2018), little did she know that the song will go on to become such a massive success. With the enormous success came a fair share of brickbats also. While purist of music have always loved the original version of the song, critics do say that the new version is also pretty good.

Nora’s dance was appreciated massively in this song. Her dance steps made the nation sway to the beats of the song. However, when Sushmita decided to dance on the new version of the song, she pretty much schooled Nora on how to ace the steps to the beats.

Sushmita captioned the video as: “#dilbar was always a #feeling #groovy #coreworkout #lastnight Don’t miss my friend Sreejaya’s absolute focus in shooting this video!!! I missed you @farahkhankunder #lovereloaded #dilbardilbar “Tell me you guys saw the wink” #naughtyme love you guys!!! #keepgrooving 🏻 (sic).”

The video of Sush dancing went viral to the extent that Nora too couldn’t stop from commenting about it. She shared the video on her Instagram page with the caption, “Ugh i just love her legend !!! @sushmitasen47 #originaldilbarforlife (sic).”

We all remember how Sushmita had said recently at the Lakme Fashion Week that she loved the original song more. She had said, “Nora was absolutely fantastic in it and my favourite part of this song are the first two lines, which they added (in the revamped version) and is very well done. The remix is also very well done. Nora has absolutely killed it but I still like the original version more.” After hearing to that, we pretty much knew that a video of Sush dancing to the new version was in the way. And one look at it and we know, she has nailed it.

Two Iranian computer hackers were charged Wednesday in connection with a multimillion-dollar cybercrime and extortion scheme that targeted government agencies, cities and businesses, the Justice Department said. Faramarz Shahi Savandi, 34, and Mohammad Mehdi Shah Mansouri, 27, are accused of creating ransomware known as SamSam that encrypted data on the computers of more than 200 […]

Blackstone warns of internet impact on US shopping malls

A woman passes a shuttered anchor store in the parking lot of the Marley Station Mall in Glen Burnie, Maryland © Bloomberg Blackstone, the world’s largest real estate investor, has warned that the outlook for America’s enclosed shopping malls is darkening quicker than experts expected as the growing online retail threat hammers their valuations. More […]

Following its corporate reorganisation last month, Google is making another major change – the company on Tuesday unveiled a new logo. Google’s new logo epitomises the company as it stands today, present on myriad devices rather than its humble roots of a single browser page. Apart from the redesign of the full logo, which while […]