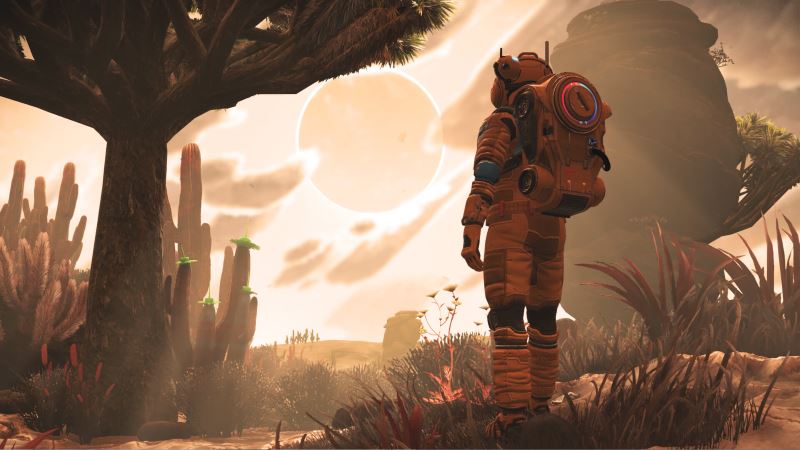 No Man’s Sky developer Hello Games has announced a new free update called “Visions”, with the intent of adding more variety and diversity to its universe. It will bring new planet biomes, new bizarre creatures, new shades of sky and grass that make No Man’s Sky more alien and vibrant, new types of water, improvements to atmospherics that allow for rainbows, and mysterious artefacts that can be claimed as trophies among other changes.

“Millions of previously dead planets have now burst into life, creating a weirder, more surprising universe to explore,” Hello Games founder Sean Murray said in a blog post. “Predatory fauna protect their planets from interlopers, with some creatures even masquerading as ordinary minerals. Deadly flora now has much more variety, with carnivorous trap plants and bloated gas flora waiting to snare the unwary and reward the cautious.”

The new ‘Visions’ update for No Man’s Sky also brings an archaeology aspect to the game, in which players can search planets for the ancient bones of alien lifeforms. “Unearth the long-forgotten remains of fallen satellites and scrap them for salvageable parts, but risk drawing the attention of new, challenging, corrupted sentinel drones,” Murray added.

Finally, players can share progress for a new Community Research mission in No Man’s Sky, to work towards a common goal of the Eye of the Korvax helmet. There will be new emotes, building parts and a range of fireworks available as well.

No Man’s Sky update v1.75 ‘Visions’ will be available Thursday across platforms.

Shared world shooter Anthem has a release date of February 22 for PS4 and Windows PC. While most of the footage we’ve seen of the game stems from the Xbox One X version of Anthem, it seems that the BioWare-developed title will have some PC exclusive visual features courtesy of Nvidia. The graphics card giant […]

Hitman FREE – First episode of game free on PS4, Xbox One and PC from today