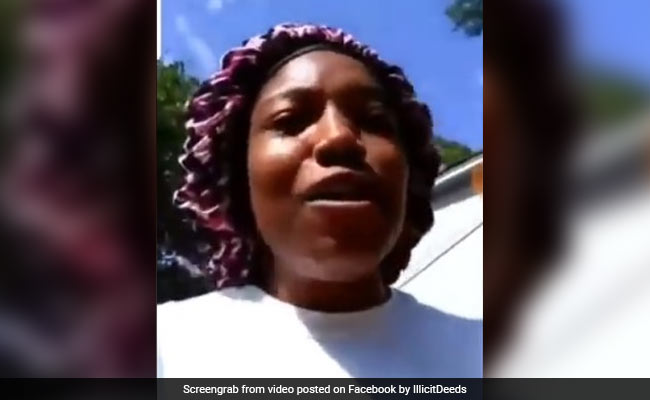 “I always get the last laugh,” Lasiter said on the self-filmed video, highlighting her vengeance.

Brandi Yakeima Lasiter wanted to punish the men of Americus, Georgia, who had allegedly wronged her. She set her plan into motion last week on a Facebook Live feed, claiming to be HIV-positive and broadcasting she had intentionally infected her past sexual partners.

The video spread quickly and, though there may be truth to the saying “hell hath no fury like a woman scorned,” when faced with criminal consequences, the 36-year-old woman retreated.

Americus Police Maj. Herman Lamar told the Associated Press on Wednesday that Lasiter said the video was a lie and she was not HIV positive. Lasiter shared results of a 2018 blood test with the police department to corroborate the most recent version of her alleged bill of health. She also agreed to take a second blood test.

“She stated she was angry at the people named in the video when she posted it,” Lamar said.

Local law enforcement first received reports of the video on Friday. The links led them to Lasiter’s minute-long Facebook rant. In the original post, which has since been removed, Lasiter launched into her lament with: “I am HIV positive.”

Clad in a white T-shirt and pink-streaked cap, she listed her alleged “victims” – her past partners and their wives or girlfriends – and described the sexual encounters in detail.

“I always get the last laugh,” Lasiter said on the self-filmed video, highlighting her vengeance. “I get real nasty and evil.”

More than two-thirds of states and territories across the country have enacted HIV criminal laws – some, like Georgia, do not require transmission of HIV. In several states, failure to disclose is a crime, even if the HIV-positive individual used a condom or was taking virus-suppression medication. Other jurisdictions criminalize conduct that poses the risk of transmission, like spitting and biting, according to a report published by the University of California at Los Angeles School of Law’s Williams Institute.

In recent months, several cases across the nation have divided advocates and sparked debate over whether HIV criminal laws are preventing transmission or merely stigmatizing those already infected.

Sanjay Johnson, 26, exposed another man to HIV during a one-night stand. Johnson had been on virus-suppression medication at the time and had been told by doctors he could not transmit HIV. Still, Little Rock, Ark., prosecutors filed criminal charges against him. He narrowly avoided prison and was sentenced to probation.

A man in Pensacola, Florida, charged with knowingly spreading the virus, was sentenced to 10 years in prison last week after having sex with two women and lying about his HIV diagnosis. Unlike Johnson, the 27-year-old Floridian had previously been convicted of having sex without mentioning he was HIV positive.

Under Georgia law, HIV-positive individuals are required to reveal their diagnosis to intimate partners; exposing another to the virus during a sexual encounter without disclosure is a felony punishable by up to 10 years in prison.

Americus police are awaiting Lasiter’s new blood-test results before any charging decisions are made.

A Singapore lawmaker hit out at Facebook on Tuesday, saying it had reneged on a promise to help rein in fake news and calling for tougher regulations, which the social media firm has cautioned against. The criticism follows Facebook’s refusal this month of a government request to remove an online article about the city-state’s banks and Malaysia’s […]

ISLAMABAD: Ahead of the general election in Pakistan, Facebook has disabled numerous accounts and pages of the Islamist Milli Muslim League (MML), in a setback to the political outfit launched by Mumbai terror attack mastermind Hafiz Saeed-led Jamaat-ud-Dawa, according to a media report today. Facebook Chief Executive Officer Mark Zuckerberg had said that it was his […]

Facebook has dismissed media reports claiming that thousands of its content moderators rely on inaccurate and disorganised information to determine what content to allow or remove from its platform. Reacting to a report in The New York Times that accused Facebook of being “ad hoc”, “disorganised”, “secretive”, and doing things “on the cheap”, the social media network on Saturday […]